The Wonder of Worldbuilding

Everyone looks for something different when they pick up a book, and writers all write for different reasons too, but one of the most common answers you'll hear--to both "Why do you read?" and "Why do you write?"--is "To explore new worlds."
Of course, this can mean a great many things. In fantasy or sci-fi, a writer might literally build a world from scratch. In historical fiction, a writer will do her best to reconstruct a world that existed long before her time. Even in contemporary fiction, writers often strive to build the fairest possible representation of the world in which they live. But what I find most fascinating of all are the worlds that exist at the crossroads of our present, our past, our future, and our wildest imagination: the AU.
Fanfiction readers among us will recognize that abbreviation as "alternate universe." Some readers call it "alternate history." But whatever you call it, what you'll find when you turn the page is a world nearly identical to our own in every way, but for one or two details. Sometimes those details are small, yet we discover that even the smallest pebbles can ripple effects out for miles. Other times, those details are quite large--think Phillip Roth large.
In the case of Anchored: Belonging Book One, which released today with Noble Romance Publishing, my big difference was slavery. 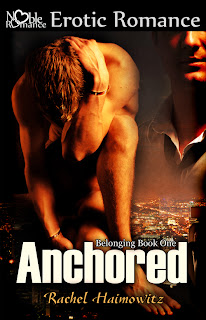 Network news anchor Daniel Halstrom is at the top of his field, but being at the bottom of the social ladder—being a slave—makes that hard to enjoy. Especially when NewWorld Media, the company who's owned him since childhood, decides to lease him on evenings and weekends to boost their flagging profits.
Daniel's not stupid; he knows there's only one reason a man would pay so much for what little free time he has, and it's got nothing to do with his knowledge of current events. But he's never been made to serve like that before, and he fears he won't survive the experience with his sanity intact.
He finds himself in the home of Carl Whitman, a talk show host whose words fail him time and again when it comes to ordering Daniel to bed. Daniel knows what Carl wants, but it seems as if Carl isn't willing to take it, and Daniel's not willing to give it freely. His recalcitrance costs him dearly, but with patience and some hard-won understanding, love just might flourish where once there'd been only fear and pain. Can Carl become the anchor in Daniel's turbulent life, or will he end up the weight that sinks his slave for good?

As an author, one of my favorite things about writing is the act of worldbuilding: creating and exploring new politics, new religion, even new laws of physics. Anchored was a particular delight, because I spent less time building from scratch and more time exploring the ripples made by slavery-pebbles in the modern-America pond. And thanks to a great many of my fellow authors, readers, and bloggers, I got to explore the world not just within the book, but on a blog tour as well. I got to put on individual characters' hats and answer interview questions as if I were them. I got to help create ad campaigns you might expect to see in a Belonging-verse newspaper. I even got to write classified ads--"Slaves for sale!"--that could have run on the Belonging-verse version of Craigslist or the New York Times.

﻿﻿﻿﻿ ﻿﻿﻿
These creative exercises were great fun for me, and I sincerely hope they'll be great fun for you as well. I invite you to come join me on the massive Anchored Release Party Blog Tour, which began on January 14 and runs through to January 23. Not only will you get to see a (fairly disturbing) not-quite-new world take shape, you'll also have a chance to win your share of thirty free books, tons of book-related swag, and two $10 gift certificates to the Noble Romance bookstore. Visit the tour hub page for a complete schedule of posts both past and upcoming, and to learn how you can walk away with your share of the giveaway loot. Hope to see you all there, and don't forget . . .

No pleasure slave, no service. Posted by Rachel Haimowitz at 3:00 AM

Very, very creative, Rachel. Your book intrigues me. I wish you much success!!

Excellent piece, Rachel. I do hope your tour is going well and I look forward to hosting you on my blog on the 21st.

Much good fortune with your new book. It does sound intriging, as Mary says.

@Brita: The tour has been much fun and I too am looking forward to stopping by your blog. Thanks for hosting me!

I like your ads. Don't want to live in your alternate world but I do want to see how well and how believable you build that world.

Heh She, I wouldn't want to live there either, but it might be a fun place to visit ;D

I'll say again. Love the ads, love the premise! Worldbuilding is one of the hardest parts of fiction writing imo!

All my best to you as always!
::winks::
Allure

I love the thought that went into the adverts, and I'm looking forward to the classifieds later on your tour,

Worldbuilding is great fun. Even changing something as seemingly minor as adding one extra stately home to an area (as I've done for my WiP) gives me hours of figuring out what else needs to be moved or changed.

@Allure: For me, worldbuilding is about the most fun I ever have as a writer. But then, that may well be because it's time spent primarily daydreaming, as opposed to doing the hard work of sitting down and actually banging out a scene ;-p

@Stevie: The classifieds are seriously f*$ked up, and it's quite possible I had far too much fun writing them >:D

Thanks both for stopping by!

I enjoyed the post and the sneak peek. I look forward in reading both Anchored and more blog posts.

@Tracey: Look at you, girl, makin' the rounds! :D Thanks so much for following the tour so faithfully and for all your kind words :)

Look who's blogging at the Noble Romance Authors' Blog

Where else are Noble Authors Blogging & Interviewing?

Some of our authors have new websites 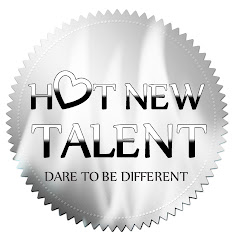 We are very excited to have these talented writers at Noble and we encourage everyone to get to know them, take them under your wings and help them in any way you can.

Have you gotten your 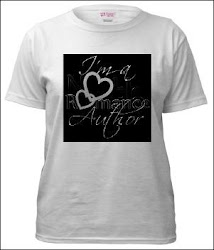 Get your I'm A Noble Romance Author Gear 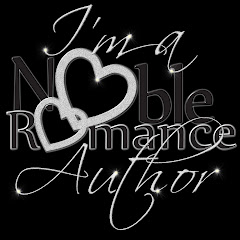 Visit our Cafe Press Store. Brag about being a Noble Romance author

Noble Romance will be offering up many contests in 2011. To qualify, you must be a member of the Reader's Loop and subscribe to the Noble Romance Publishing newsletter.

Both are easy to do and take just a moment. Click the links and then stay tuned. A HUGE contest is about to be announced.